Teddy Boys and Girls were one of the first post war subcultures to develop. I found information and pictures from websites such as the ones below.
http://www.covertcandy.co.uk/covertblog/the-history-of-vintage-fashion
http://theteddyboys.co.uk/1950s/
http://en.wikipedia.org/wiki/Teddy_Boy_(youth_culture) 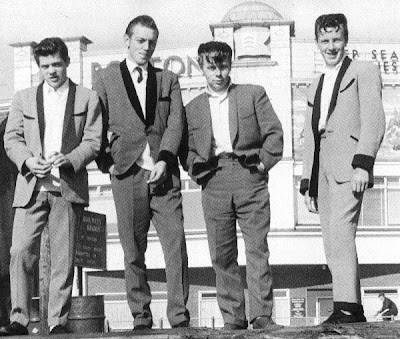 'All began in the early 1950’s in England. Some teenagers gangs appeared in the East End of London; they were called the Cosh boys. It was very easy to recognise them. They wore a very special rig : long jacket with velvet collar and cuffs drain-pipe trousers like under the reign of Edward VII (1901-1910), bright ankle socks and slim Jim tie. Their hair was “long” and greased. These Cosh boys terrified the English society : razor attacks, fights between gangs but also against the police, robberies … After the Second World War England woke up with an headache ! Press needed a new term to describe these gangs which number increased each day? The word chosen was Teddy Boy(s) and Teddy Girl(s), Ted(s)' - (quote from theteddyboys.co.uk/1950s/) 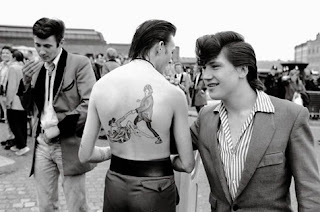 Posted by Harriet Johnson at 10:19